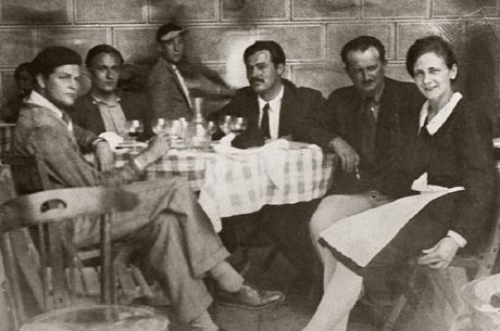 While I must admit that I never read the book, the title of Hemingway’s musings about the Paris literary culture has intrigued me since I was in High School. When I was younger, I dreamed of being a part of a cultural movement, a gathering with a group of like minded thinkers and intellectuals who would set the world on fire with their imagination. While I have since left behind the values of the avant-garde, that same desire remains.

Evangelization is about so much more than trying to influence ideas and actions. In a certain sense, we can see that great title of Hemingway’s book as a way of framing both how humans are shaped and how to go about bringing change in the culture. Simply put, I have come to believe that one of the most important things we need to do is to build networks of communion, relationships grounded in a shared vitality.

We need to throw parties, but not just any parties. Our social events need to build a shared wisdom; our friendships need to be spiritual. Everything must flow from and lead us back to a personal relationship with Jesus Christ. Furthermore, this relationship finds its identity in the sacrifice of the Mass, that Eucharistic encounter in which we receive the Body and Blood of our Lord. In a sense, the feast shared among friends is first informed by the feast above all feasts, the Eucharist. One leads to the other.

When our lives are centered on Jesus Christ, everything flows out from that intimacy with a sense of warmth and gentleness. Evangelization becomes less strained and forced, and it instead becomes friendly, inviting, and intentional. Our parties take on a greater fulfillment because there is not the burden of having to worry about what one friend called, “A moral hangover.” Instead of the tension and self-consciousness that often accompanies judgment (especially pious judgments that disguise themselves as religion), our feasts soon become marked by friendship and mutual up-building.

That is why life must always move from feast to feast; from the Eucharistic feast to the after party (with periods of fasting thrown in the middle).