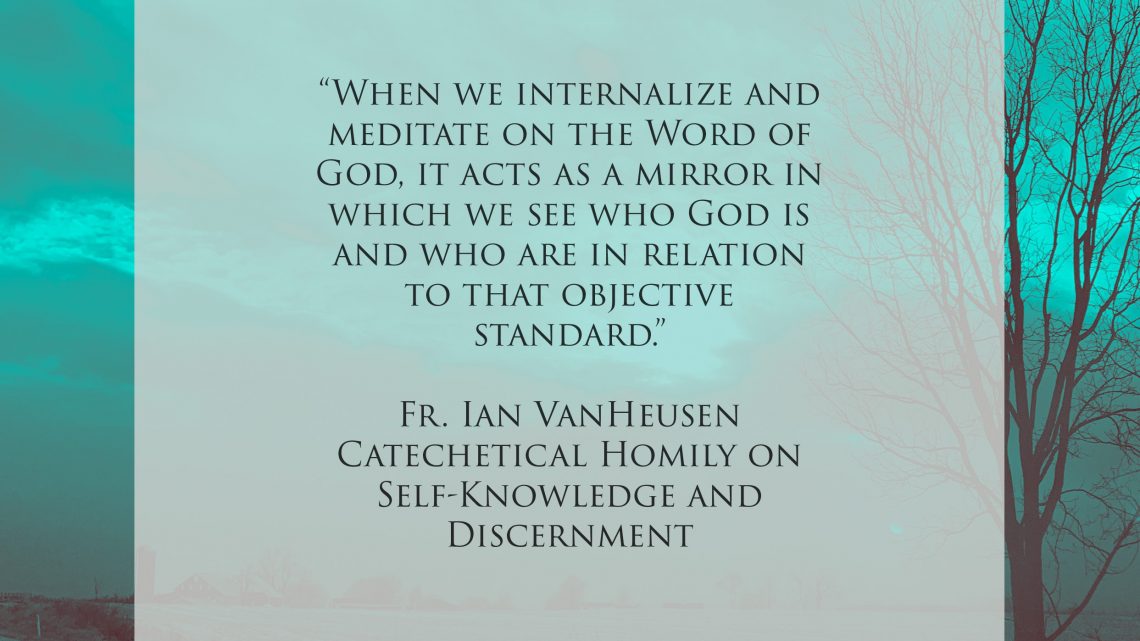 *Continued from the audio of Catechetical Homily #3: Self-Knowledge and Discernment*

When I was a kid, my main desire was to be a soccer player. I spent hours practicing each day, and the reality was that I wanted to be like Pele or Ronaldo and score a lot of goals. I insisted year after year that I played best as a forward or in midfield because I felt I was a good goal scorer.

It was a huge blow to my ego when in my senior year when I was asked by the coach to play defense and be the sweeper. You might be wondering what is the big deal, but for a young guy who was 18 the thought of being a defender felt like a let down. Defenders don’t get the girls and they don’t get the attention… and I wanted the girls and the attention. The irony is that it ended up being my best season and I made the all-county team. In fact, even though I was not recruited for Division I, I walked on as a freshman and the coach was surprised when I insisted on trying to play offense.

I was cut that year and you might think, well Fr. Ian certainly learned at that point he was best served as a defender… but I really didn’t learn that lesson until about 2 years ago when I finally accepted that I play best in defense.

My lack of self-knowledge really sabotaged my potential with soccer.

When all is said and done, the main thing that keeps most people from thriving in their careers and in their personal lives is a lack of self-knowledge. Instead of taking an honest look at ourselves and our abilities, we either sell ourselves short or we think too highly of our abilities or misunderstand our roles.

The same thing goes for the spiritual life.

For example, it is not uncommon that someone will approach me in confession and fall into one of two categories. One, they might be struggling with significant mortal sins, but they have no knowledge of the deeper dynamics that are keeping them bound. The second, there is a kind of lukewarmness where the person realizes that they lack religious fervor and zeal, but they lack any knowledge of how they fall into sin.

In both cases, it is a lack of self-knowledge which is keeping the person from being the saint they are called to be.

I would argue that a saint is able to clearly express not only the ways they fall into sin, but they could also accurately predict the ways that they could fall into sin if the circumstances were right. Such a knowledge is not inhibiting or self-conscious rather this self-knowledge is liberating because the person is aware of the circumstances that lead to their individual flourishing.

So the question becomes, how do we acquire self-knowledge? The answer is regular confession and regular meditation. When we take time to regularly look within, we start to discover what we are doing and why we are doing it.

Furthermore, when we internalize and meditate on the Word of God, it acts as a mirror in which we see who God is and who are in relation to that objective standard. Meditating on the 10 Commandments and the 7 deadly sins and other truths of the faith are also a powerful means at which we achieve self-knowledge.

In addition to meditating on the Word of God, we are also called to reflect on our experience. Each of us is called to connect with our individual experience and how the Holy Spirit works within. Thus,  it is by means of meditation that we learn to be intentional. Without meditation, we will never learn to see and understand what we do and why we do, and our efforts to grow in our relationship with the Lord will be thwarted.

I will discuss prayer and meditation more in the next catechesis on prayer, but for now I wish to discuss how in meditation we learn to discern the work of the Holy Spirit.

Be aware… every day of your life, there is a war in the human heart between good and evil. Through a habit of regular confession and regular meditation, you learn to conquer the work of the enemy by discerning his vexations from the authentic inspirations of the Holy Spirit. The path of holiness requires that we learn to listen to what is going on inside and discover the voice of the shepherd.

There are many different schools of spirituality which teach various paths to discovering this divine presence, but I propose that the Rules of Discernment articulated by St. Ignatius of Loyola are the most concise and best synthesis within the tradition.

In his rules of discernments, he teaches us to distinguish between consolation and desolation, and how the believer should act during each. Within his spirituality, the goal is not simply to maximize good feelings and to try and always be positive… but rather adapt to the spiritual circumstances in which we find ourselves.

The salvation of your soul depends not only obeying a set of rules, but a fervent relationship with Jesus Christ in which you learn to hear his voice. Amen

Next post Order and Devoutness Commentary on the Our Father