Beyond Knowing and Unknowing 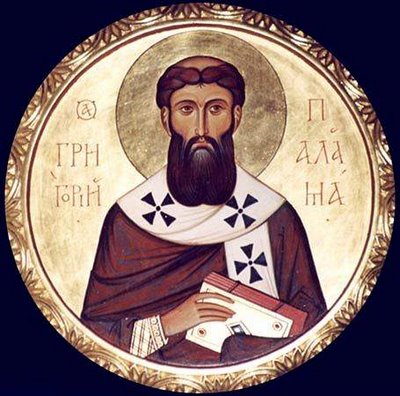 Gregory Palamas’ theology of prayer as presented in the Triads is a fruitful source of reflection that can help bring clarity to the contemporary American debate on Centering Prayer. One of the major challenges to Catholicism within the American context has been the influence and introduction of Eastern Spiritualities into our society. Although strict adherents to Buddhism and the various forms of Hinduism form a relatively small number, Eastern ideas on meditation have had a profound impact on our contemporary understanding of prayer. Dialogue with Eastern religions has formed an important part of the American Catholic experience. Initiated in part through the work of Thomas Merton, it has since grown to include many writers and theologians, particularly within the context of American Catholic Monasticism. Questions about the relationship between Eastern techniques of meditation have been raised, and this has led to considerable debate among different writers and theologians. What has emerged is two distinct takes on Catholic Spirituality, both of which claim to be faithful to the deposit of faith.

For the sake of this paper, we will classify these two diverging perspectives with the following generalizations. The more traditional perspective tends to emphasis the importance of discursive meditation and the mediating role of Jesus Christ. This perspective can be characterized as kataphatic in its theological tendencies. Such an approach emphasizes that in Jesus Christ, God granted to humanity a revelation of His triune life that is accommodated to our rational capacities. Such a revelation is both intelligible to the human person and able to be explored and reflected upon using the methods of human inquiry. Theology likewise informs spiritual practice whereby the methods of meditation include patterns of discursive and imaginative prayer, whereby revelation leads to familiar discourse with God. Although this trend in spirituality acknowledges mystical and contemplative prayer, the literature tends to suggest that such prayer is not common and achieved only after years of patient meditation.

In contrast, the opposition tends to emphasis that prayer can move from discursive to non-discursive meditation relatively soon within the spiritual life. The emphasis tends to be on apophaticism, or the fact that God is unknowable in His essence, and this theology informs a spirituality that draws heavily from literature such as the Cloud of Unknowing. Although there may be some elements of syncretism among adherents to movements such as Centering Prayer, the founders, such as Fr. Thomas Keating and Fr. Carl Arico, go to great lengths to argue that their work is both Christocentric and within the authentic Catholic tradition. The main thrust of their argument is that there exists “methods” of acquired contemplation which can be integrated into Christian living relatively soon within one’s spiritual journey. However, they are careful to follow the classical manualist distinction in which acquired contemplation is seen as a practice associated with our human activity while infused contemplation is beyond any technique and properly speaking the work of the Holy Spirit.

Both trends in American spirituality are problematic. The side that emphasizes the kataphatic methods of meditation tend to ignore or minimize the benefits and need for more apophatic approaches to prayer. In contrast, movements such as Centering Prayer tend to have an “anti-discursive meditation” tinge to them. They seem to suggest that discursive meditation is to be disregarded and left behind for more exalted forms of prayer as soon as possible. In response to the inadequacies of both positions, an important phrase of Palamas can help clarify and shed light on the debate.

Palamas argues that the experience of God’s glory is beyond “knowing” and “unknowing.” This statement takes place within the context of his debate with the philosopher Barlaam. Barlaam argued for a kind of philosophical apophaticism. For him, one could never come to any positive experience of God, especially not any experience that could be understood and integrated into our temporal existence. That being said, Palamas is not arguing for a further apophaticism, but rather positing that the experience of God is beyond both apophaticism and kataphaticism. Along these lines, Palamas posits a kind of overflowing of the Divine into our created nature. In this sense, he argues that while the experience of God transcends the natural order, it still remains incarnational in that it enters into the created order and transforms it. This transformation is not merely on the level of our interiority, but rather involves the whole person, both body and mind.

Building on the theology of Palamas, we can posit that “knowing and unknowing” are fulfilled in our participation in God, allowing them to operate in the freedom of our Divinized personhood. Thus our new mode of existence, or our participation in the Divine life, does not constitute a rupture with our created nature, but rather a fulfillment. Knowing represents an aspect of interiority which is drawn up into and transfigured by the divinizing light of Christ. Likewise, unknowing is a characteristic of human activity which must be brought under the domain of God’s activity. In this regard, unknowing represents a kind of natural kenosis, an aspect of human nature that is able to silence our interiority in a state of absorption and attention. While representing a natural good, such an acquired skill must be put at the service of Jesus Christ, seeking to fulfill the double command to love God and love neighbor. Thus, within the American debate, there is a need for a robust spirituality which integrates both apophaticism and kataphaticism as a harmonious whole.

In terms of concrete practice, the kataphatic tradition consists of practices such as the Benedictine school of lectio divina and the Ignatian school of imaginative prayer. These represent the two most significant currents of Western kataphaticism, and form an integral dimension to authentic Christian spirituality. Likewise, the Hesychast emphasis on the Jesus prayer forms the center of a thoroughly Christian apophaticism. The point of integration lies within a key concept of both Eastern and Western Spirituality.

Many of the saints have drawn great inspiration from the dictate to “pray without ceasing” (1 Thessalonians 5:17).  Understood in its proper context, this means that all of human activity must be drawn up into the life-giving presence of God, a presence that Eastern theologians associate with the light of Mt. Tabor. In this way, praying without ceasing does not indicate a command to cease our natural activities for an idealized state of contemplation, but rather a mysterious synergy whereby all of our interior activity is joined to the activity of God.

In conclusion, Palamas helps pave the way to a renewal in spirituality that properly takes into account both the apophatic and the kataphatic dimensions of theology and spirituality. Both in the work of Palamas and in our discussion in general, this integration and harmony is grounded in Jesus Christ and draws its vitality from him both in practice and in theory. Such considerations can help to clarify and bring further developments in the contemporary debates on Catholic spirituality that are currently taking place within the United States.